Do you care what some man sings about redemption from homelessness, evangelical credulity, substance addiction and mental illness? What if he’s also a man who then finds enlightenment that is equal parts Jesus (on one of his less crazy days), Gandhi, Sufi Mysticism, and drugs taken in the rain forest? Could his music be worth listening to?

It would be if the music was point-blank terrific, the lyrics heartrendingly beautiful, the musical style the singer’s own, and his truthfulness so raw it would make all but the hardest soul cry out. Oh yes, and this man can sing.

He has a voice that’s part Leonard Cohen, part Bob Dylan, part Tom Petty and (unusual for this day and age) with Frank Sinatra’s clarity of diction. Every word of his fearless poetry lands with the force of the lyrics sung by Johnny Cash in Folsom Prison.

That is why I’m in love with the music of Steev Richter.

I’d never heard of Richter until 2 weeks ago. I only met his music because he emailed this to me:

I, on the other hand, went to school to become a minister and instead became a musician. Then I became addicted to alcohol, drugs, and was diagnosed with mental illness. I wandered for 15 years with so much bitterness towards the way that I was raised, the hypocrisy that I witnessed and the fact that Jesus never spoke to me. Either there was something wrong with me or everyone else was full of shit. I chose the latter.

I have made my peace with all of that. I have found my own spirituality. I have reconciled with my family but the litmus test for everything in my life is Love.

It is so heartbreaking to see how cruel evangelical beliefs have become. It is so difficult to know that many of “my tribe” voted for a man who is the antithesis of everything that they are supposed to believe. He is the polar opposite of Love, Gentleness and Kindness.

Watching your video was so inspiring. Knowing that you come from the tradition that you do and that you do not speak with bitterness. You speak with Love but you speak in fearless Truth. It really had a profound effect on me. It’s good to know that others have lived lives similar to mine in many ways and have come through the process better off. Thank you so much!

I really enjoy your art. You seem to have such a lovely and kind soul. I would like to share my art with you as well if you don’t mind. These songs are my journey and my belief in Love. God is Love. 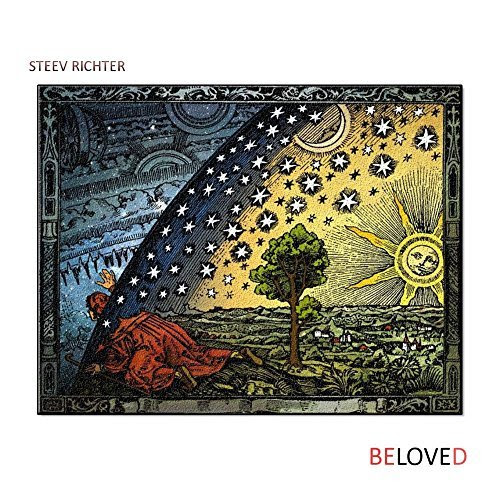 I found myself listening to the anthem for We-The-Discontented-Who-Long-For-A-Deeper-Meaning.

Steev’s music is poetry made by a profoundly articulate artistic soul. After a trip to the rain forests of Peru in 2011, he decided to see if he could make music that reverberated with themes of love, death, and spiritual awakening.

Listen to the first track here. This YouTube fan-video — including some misspellings in the lyrics! 🙂 — is not by Richter but the music is…

Here’s what some other people are saying about “Beloved”:

“I wasn’t aware of Steev and his talents until Danny Blume lured me into his world of song, and a compelling world it is. Attractive and groovy in many ways while also possessing an almost troubling current of raw insight and emotion, I am certainly better for having heard his music. I hope many others can find him and find time to listen.”

“What can you say about a guy who believes in you, doesn’t question, pays attention, doesn’t want you to be afraid and reminds us of that every day with his songwriting. Steev Richter somehow has made me feel like there’s hope. That’s pretty amazing. Thank you Steev”

“I was involved early in the process – having heard Steev’s songs when they were in their demo form: just piano and voice. I was immediately drawn to his songwriting – tuneful, great lyrics, and deeply soulful. It was great fun to be part of fleshing them out, alongside an incredible cast of players.

I was so happy to hear those same qualities come through in the final production – through its many layers – a testament to the strength of the compositions, Steev’s intuitively organic approach, and to his smart choices as far as the musicians he chose to help realize this record.”

“Steev Richter possesses that rare combination of soul, skill, and a phoenix-from-the-ashes story that draws at your heartstrings and makes you smile and weep. We’re making the record that must be made, one that will stand the test of time and provide inspiration, wisdom, and fun to people of all generations and walks of life for a long time to come.”

Do yourself a favor and buy this album on Spotify, iTunes, Amazon, Google Play, or Bandcamp.

For more information visit these sites:

For any other inquiries go here.

Previous Post
5 paintings: A manifesto of creative redemption in the age of Trump, fascism and lies | 2017 Summer Art Show
Next Post
What the Left and Right BOTH Don’t Admit About the Inconvenient Truth Concerning HOW We Found Ourselves in Trumped America (Video)